Michael and Katie have been quick to remind me that they didn’t want to go to the beach.  Instead they wanted to go to the pool which would have prevented this problem from ever happening.  A few Tuesdays ago we went to 7 mile beach around 4:00 in the afternoon.  Michael has really become accustomed to the ocean and he loves to swim and play in the waves.  Katie has become a great swimmer in the pool and has a natural stroke, but she prefers the pool to the ocean.  So after arriving at the beach, Michael immediately ran out into the water.  A few minutes later, I followed him into the water and started to go for a swim.  My swim was immediately cut short when I noticed on my first stroke that my wedding ring was no longer on my finger!  This happened back in Arkansas when we were outside playing and luckily we were able to find the ring.  Hunting for the ring in the water would not be as easy.I swam around with Michael’s goggles in the general vicinity of where I thought the ring came off.  After an hour and a half it was clear that this was a needle in a haystack situation and all hope was lost.  Then I just happened to look up at the shore to see a giant well tanned man wearing massive headphones attached to a metal detector.  I didn’t think that the metal detector could go in water, but still thought it was worth a shot to tell the guy what happened.  Immediately he asked where I thought the ring was and how long ago it had been.  He gave a good prognosis for finding the ring and immediately lumbered down into the water, snorkel in tow with the metal detector.    For the next two hours, he searched fruitlessly for the ring.   Jennifer, Michael, and I stood out in about 4 feet of water while he searched for the ring.  Katie stayed on shore reading a book.  I never thought you could feel cold in a tropical climate, but after the sun went down the water and the air became a little chilly.  Several times during the evening, he would dive down trying to retrieve something but every time he came up empty handed.  He called the false pings pop tops.  When it became completely dark outside, he went back (not sure where) to get an underwater flashlight.  Finally around 8:00 p.m. I pulled the plug on the search.  The kids were getting tired and so was I.  At this stage I learned the man’s name, The Last Kahuna, but his given name is Mike.  The Last Kahuna then told me about his failed comedy career and also about the night writing classes he was attending on island.  He told me that he would come back out and look for the ring again.  We exchanged email addresses, appropriately thelastkahuna@hotmail.com (I didn’t realize hot mail accounts still existed).  A couple of weeks went by and yesterday I received  an email from the Kahuna himself.  No ring, but he had been searching for it. 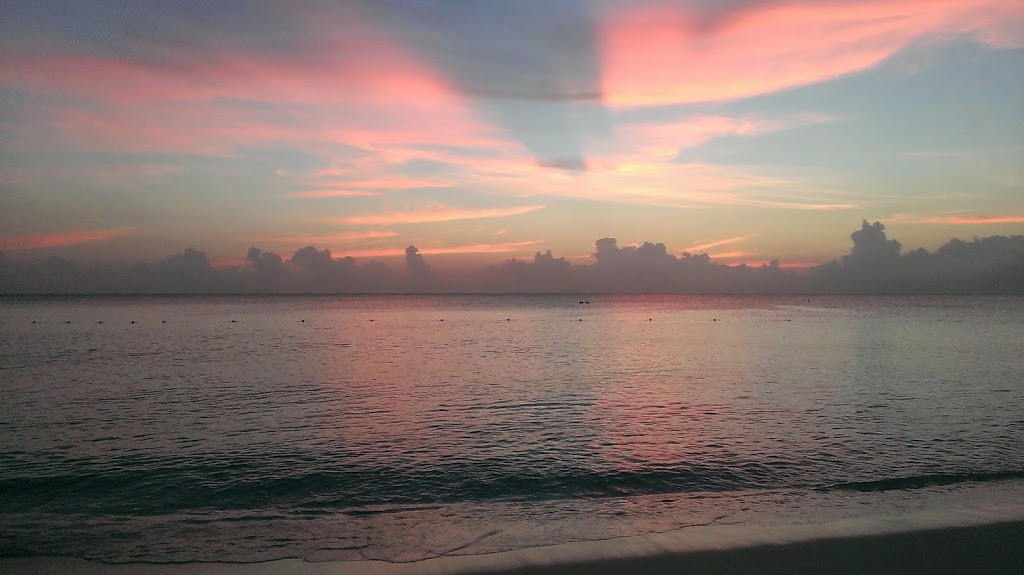 The day after Easter is a holiday here which meant no work for me, and no school for the kids.  We  went to a kite festival with a boat ride across the bay to Cayman Kai peninsula to a resort called Kaiboo.  We’ve been to Kaiboo once before and saw a large group of drunken 20 year olds taking advantage of the free ferry to get back home.  We were a little worried that our boat would turn out to be a party boat, but it was mostly adults with young children. One of Katie’s classmates was on the boat and Katie and the girl made bracelets on the 40 minute ride.    Unfortunately, the wind wasn’t strong enough for us to get our kites up into the air.  The highlight of the trip was, for a small donation, having unlimited access to the ocean kayaks and paddle boarding.  We all really enjoyed the kayaks.  I tried paddle boarding, which is standing up on a surf board and then using an oar to move yourself around.  After a while, I managed to get the hang of it but not without wiping out and falling into the water. 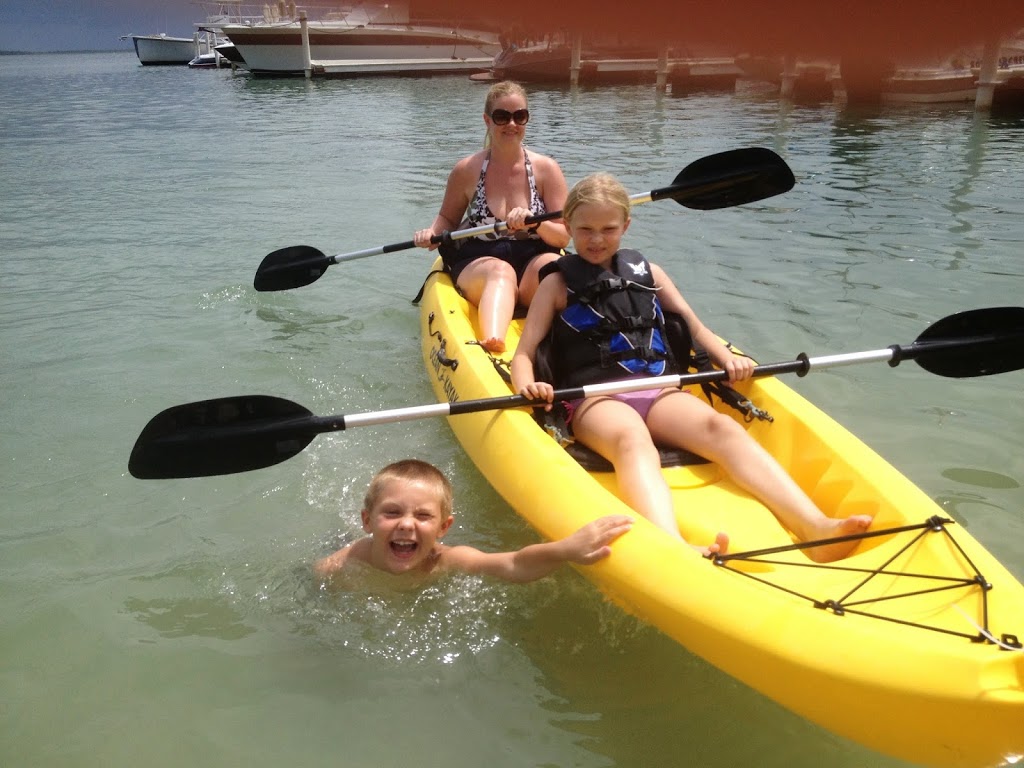 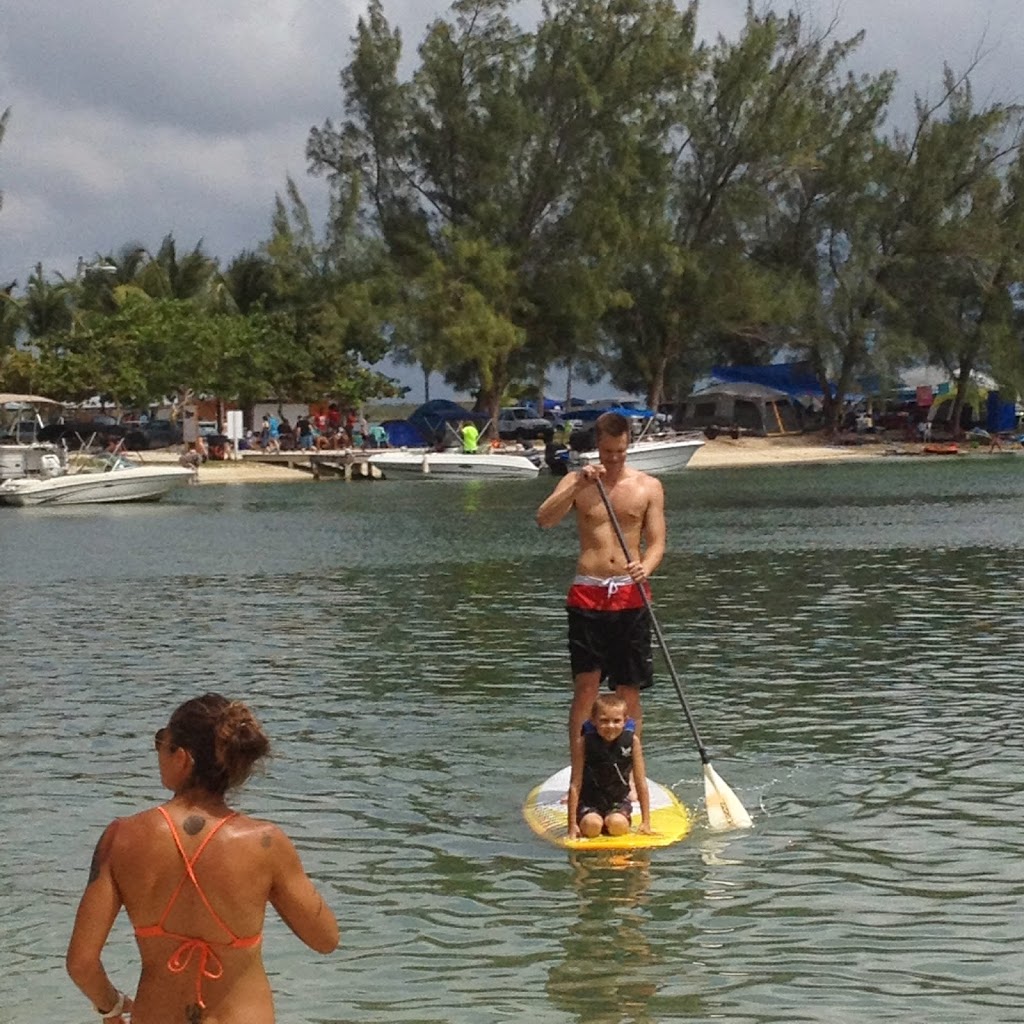 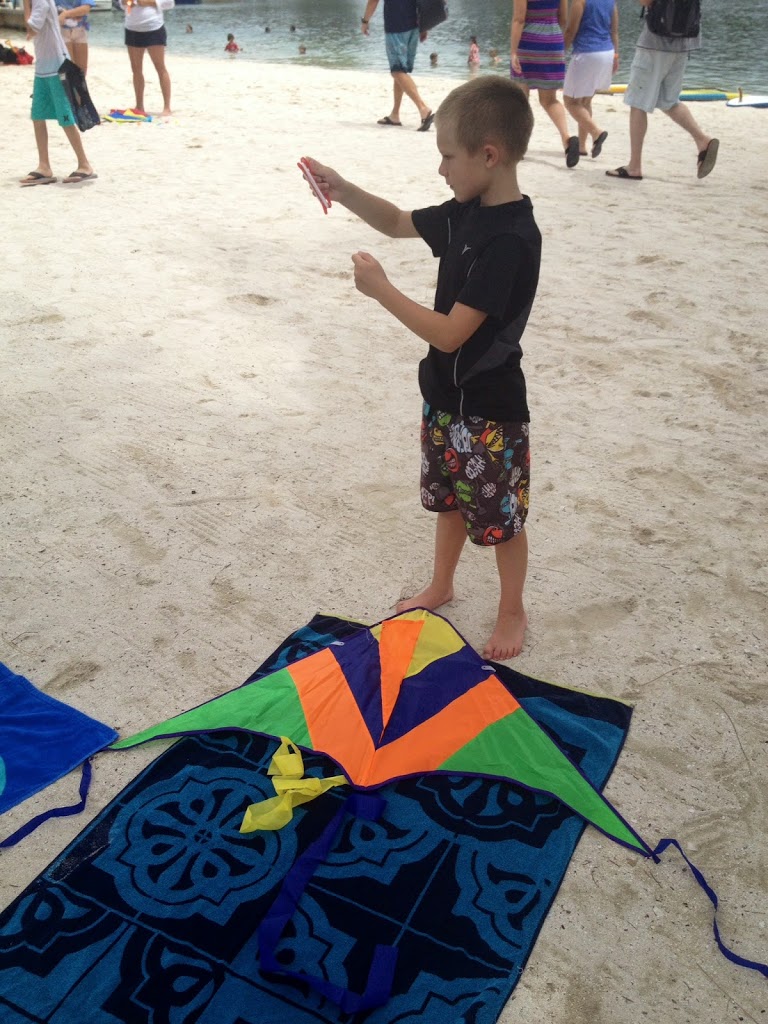 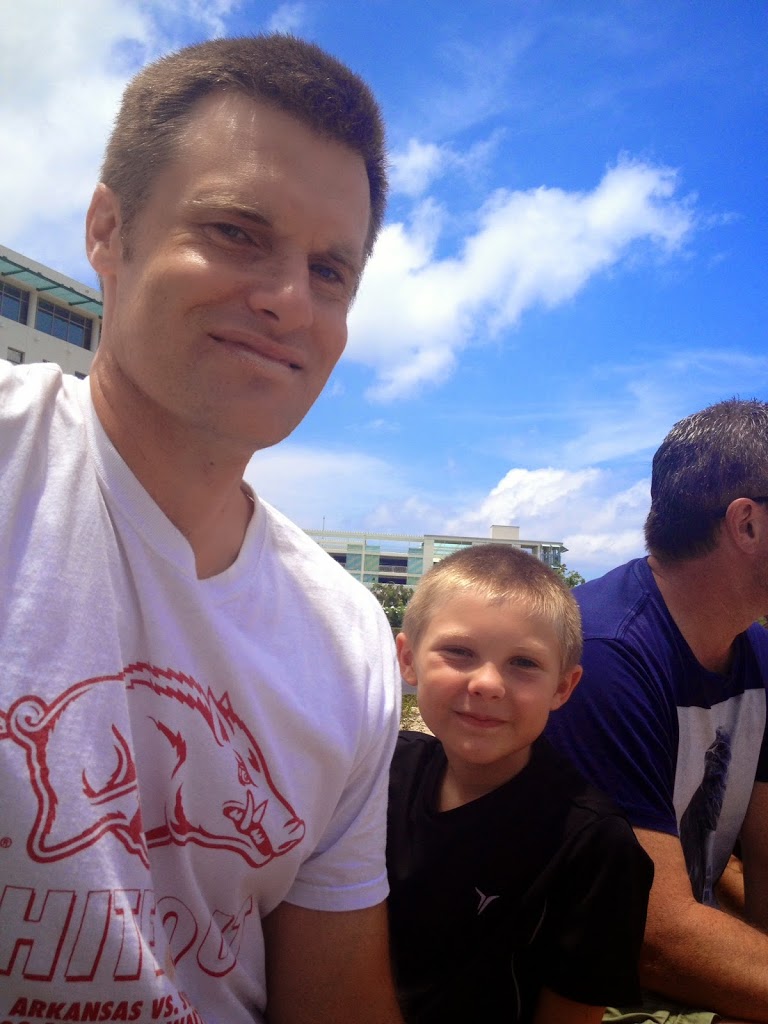 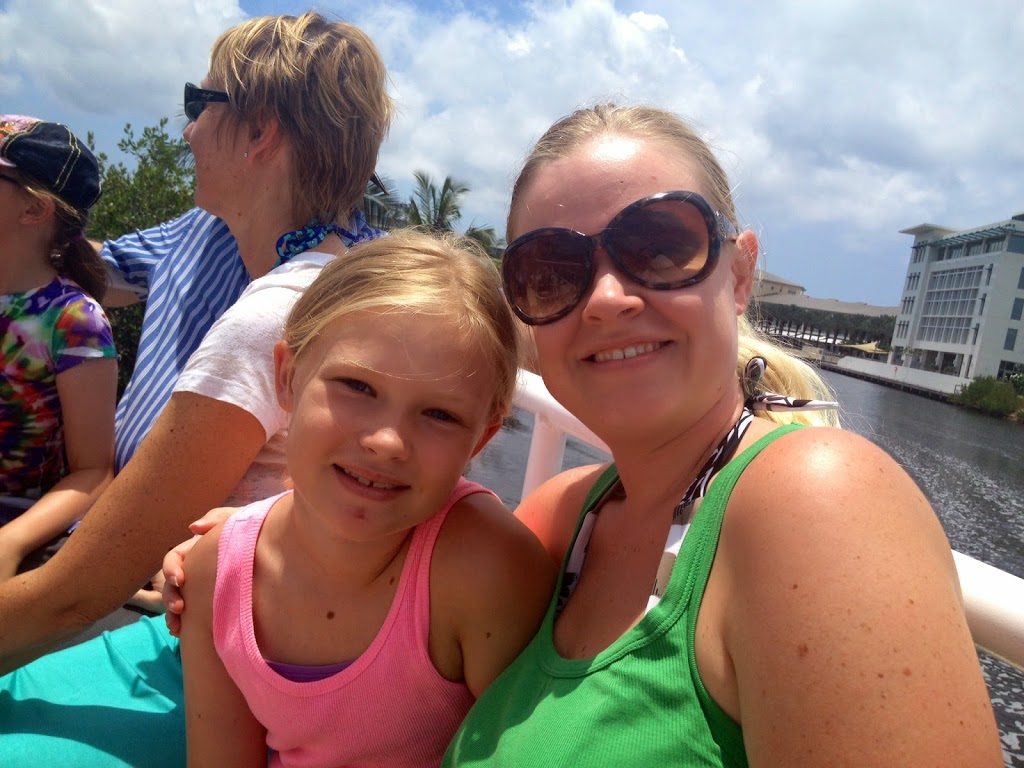 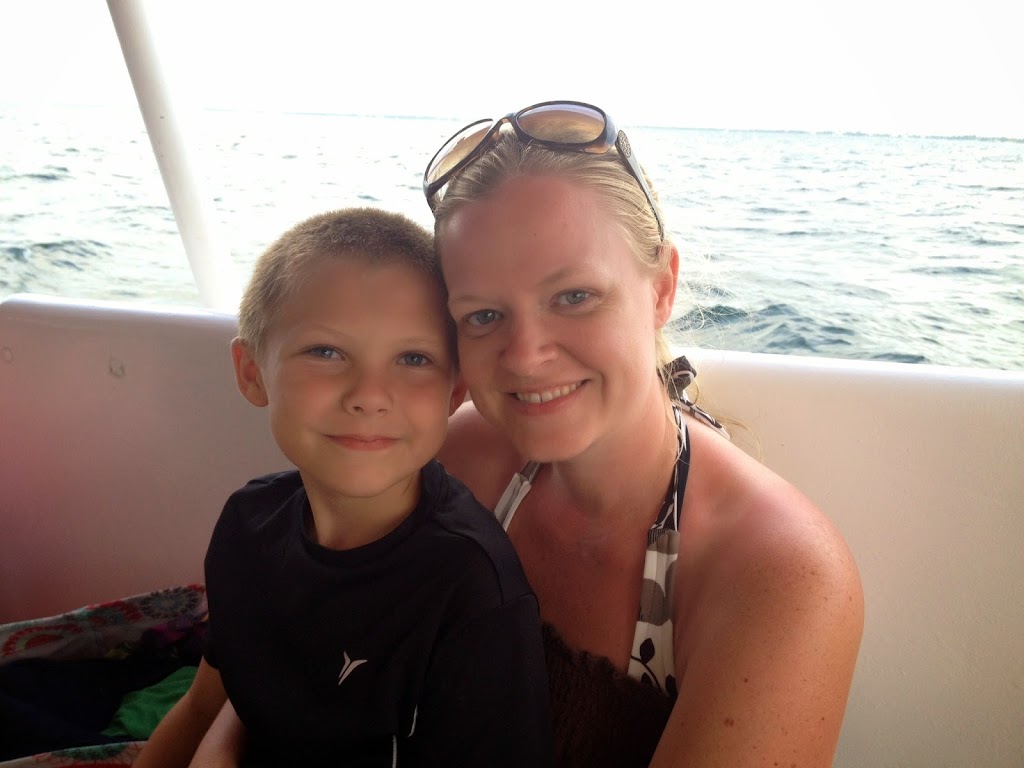 Jennifer and I really enjoy going to the gym here.  It is quite large and they play good music.  Not like our old gym in Harrison, which was very cramped and seemed to play death metal music on a continuous loop.  The mix of songs is oddly eclectic.  They mainly play pop songs but then a Nirvana song will come on followed by a Rick James song and then the theme song from Friends.  I hate running, but if a song comes on that I like then I will hop onto the tread mill and crank it up to around 8 and run for about half a mile (or until the song is over).  Some songs that I could relate to from our last visit were, “Walk like an Egyptian” by the Bangles.  I remember hearing this song during Lady Pioneer basketball games when I must have been around 6 years old.  Another song, that is a must for any gym, is the one hit wonder by the group Right Said Fred, “I’m too Sexy.”

We try and do something that is memorable but most days are just ho hum.  We went by the fish market in Georgetown to get some fresh fish for the first time.  Splayed out in front of us was an assortment of tuna, yellowtail, and red snapper.  I was disappointed in the cost, $5 per pound, but the fish was very good and maybe I can find a place that is a little cheaper next time.  Considering that you can get a fresh Maine lobster for $6 per pound, I was hoping for a better deal.  The fisherman wasn’t really into conversing and all I could get out of him was he went out 12 miles to catch the fish.  Upon seeing the fish heads and guts, Michael immediately declared that he felt sorry for the fish. 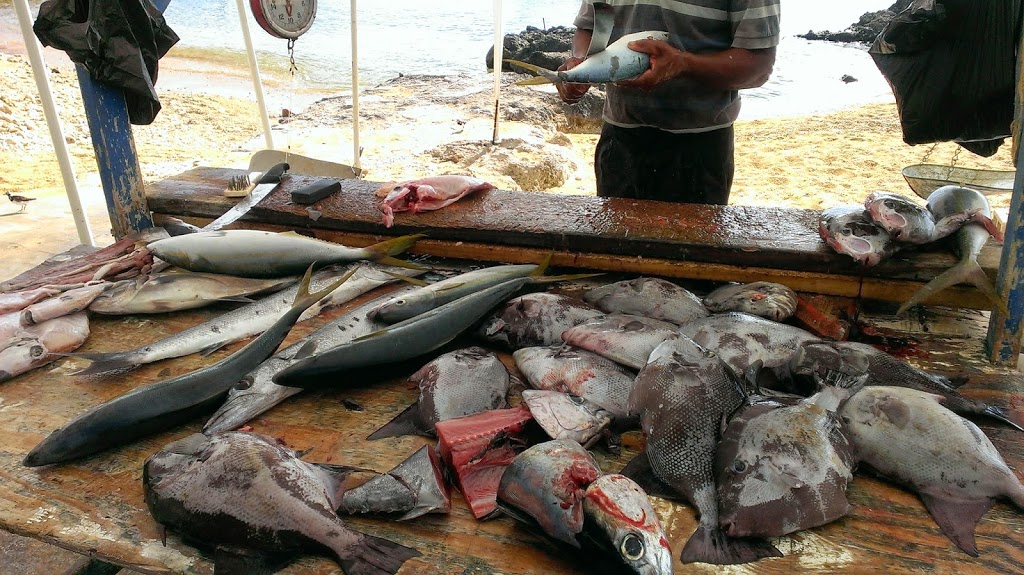 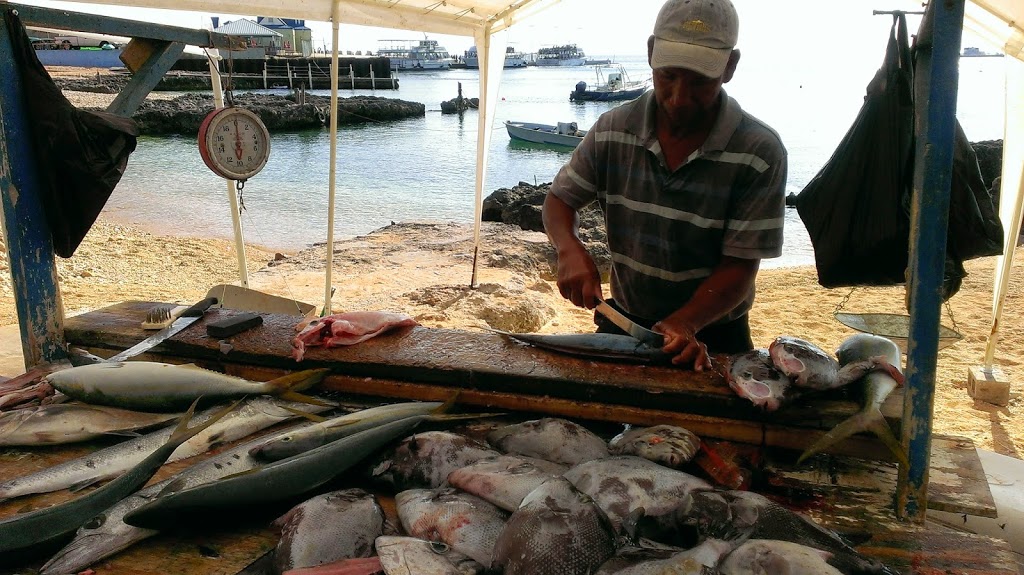 This past week I’ve been working but all of the public schools have been out on holiday.  The special needs staff are made up of speech therapists, occupational therapists, and educational psychologists.  We all share a big office in Georgetown, which is where we report to when we are required to work, but school is not in session.  By Friday of this week, everyone was definitely ready for the weekend.  I was discussing IQ tests with Stephanie,  of the ed. psychs, and then told her that I wanted her to give me an IQ test.  A full battery would have taken around one hour, so she gave me an abbreviated version.  I’ve always considered myself a hard worker and attributed whatever successes that I may have had to hard work along with a lot of help from others.  So with that in mind I told the ed. psych that I hoped my IQ would be an 84, putting me in the overachiever category.  Anything between 85 and 115 is considered to be average with 100 being the norm.  The IQ test was only comprised of two parts, a visual spatial portion that tests the subjects ability to determine patterns and a verbal section that requires the subject to define a word.  With some lucky guesses, I made it to the end of the visual spatial portion.  I told Stephanie I was going to destroy the verbal subtest.  I was feeling pretty good about myself especially when the word achromatic came up which I had heard the root word in a song one time.  However, all of the words after that were really tough and I immediately hit the ceiling.

At the conclusion of the test I  immediately declared (jokingly) that it was culturally biased and the results were not a true reflection of my abilities.  My score was a 109, which put me in the 73rd percentile.  Turns out my high school guidance counselor was right, I am an underachiever.  Stephanie said it could have been higher if I would have put more effort into the test, but I told her that I usually quit quite easily so it was actually a valid score.

Random Facebook worthy pictures and comments
Michael and I went exploring along the coast outside of our apartment and found some black spiny sea urchins in a small lagoon.  Twice we have seen a sun halo which is the sun’s rays passing through ice crystals.  It looks a little freaky. 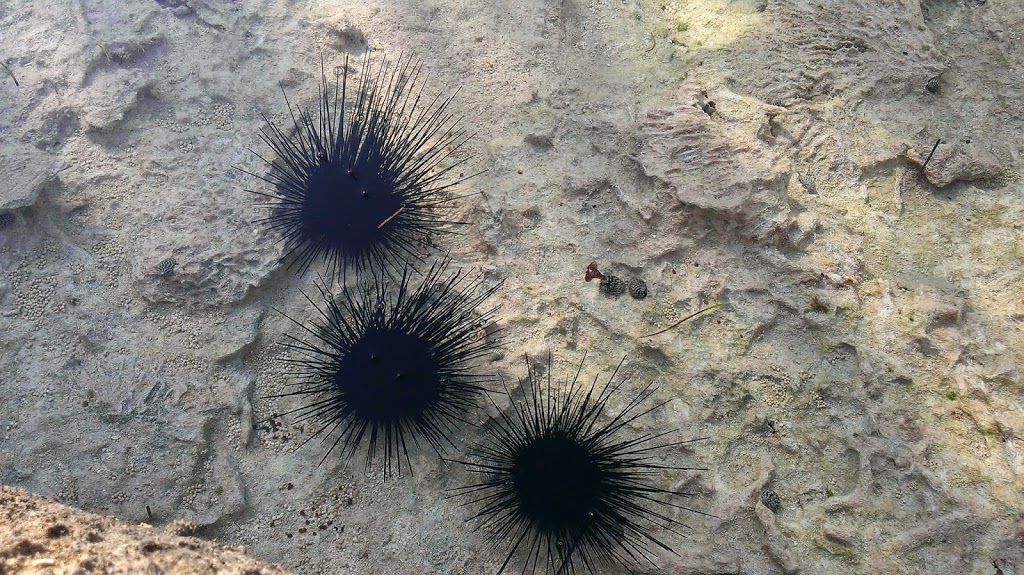 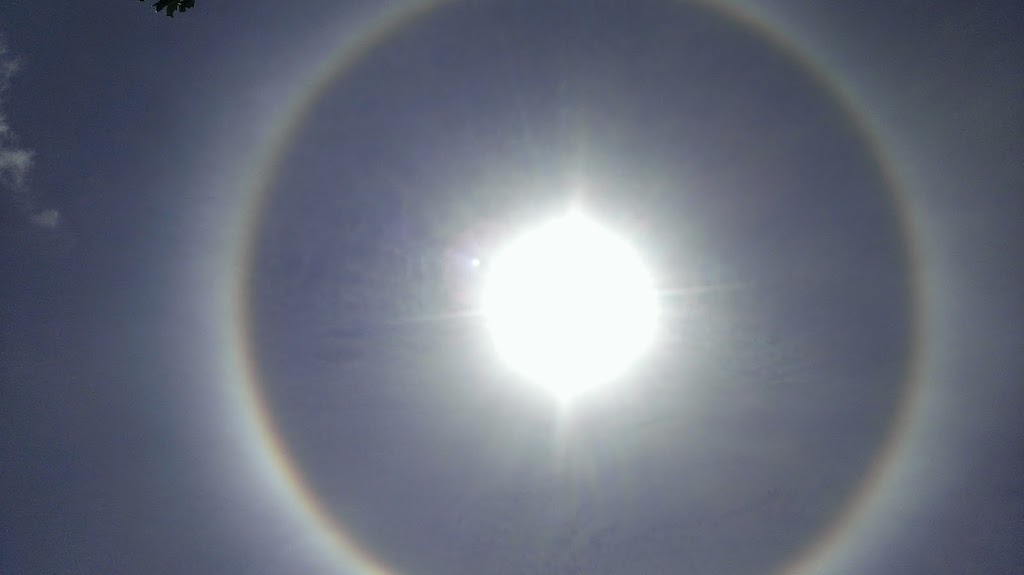 A couple of pictures from the beach yesterday. 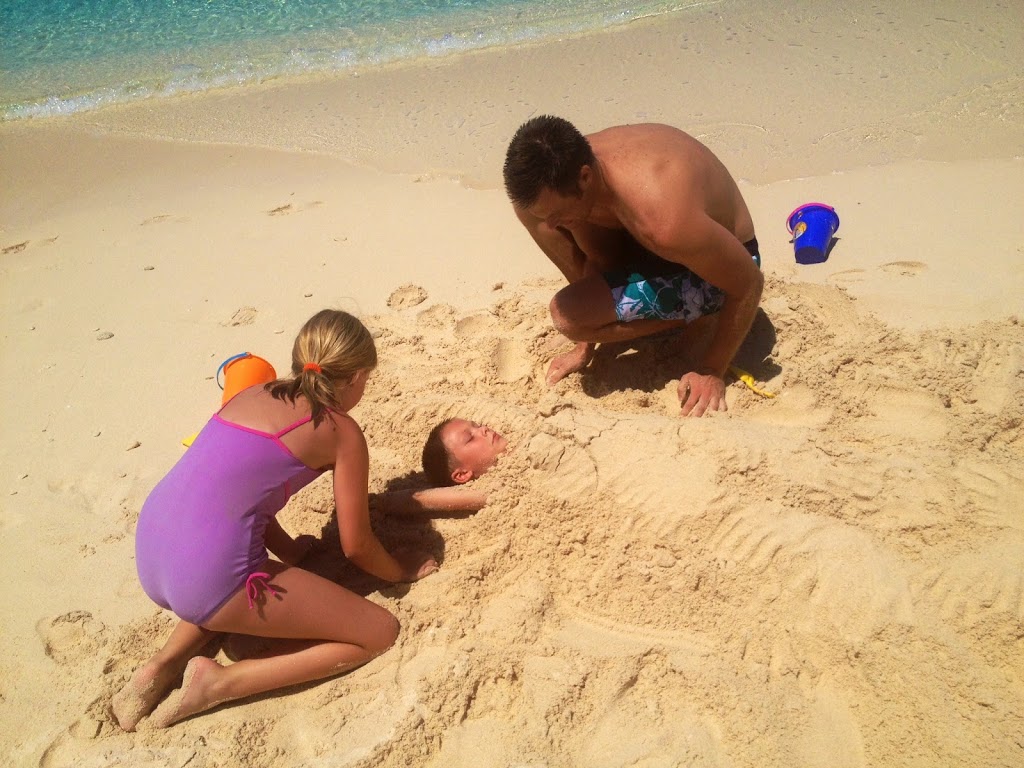 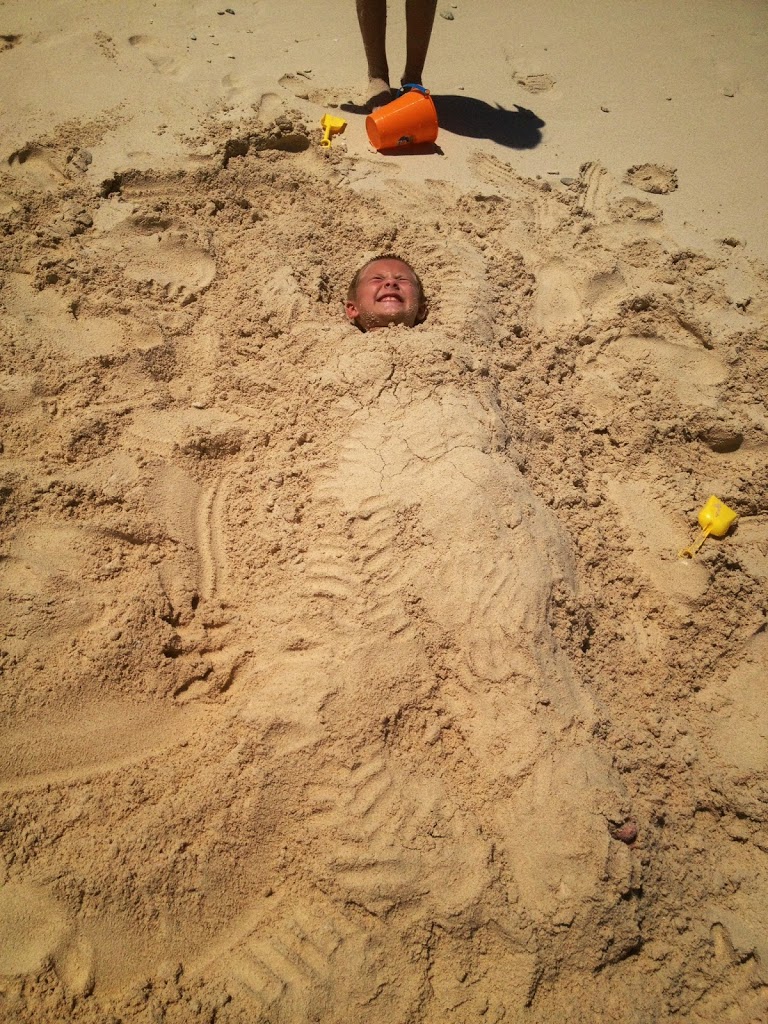 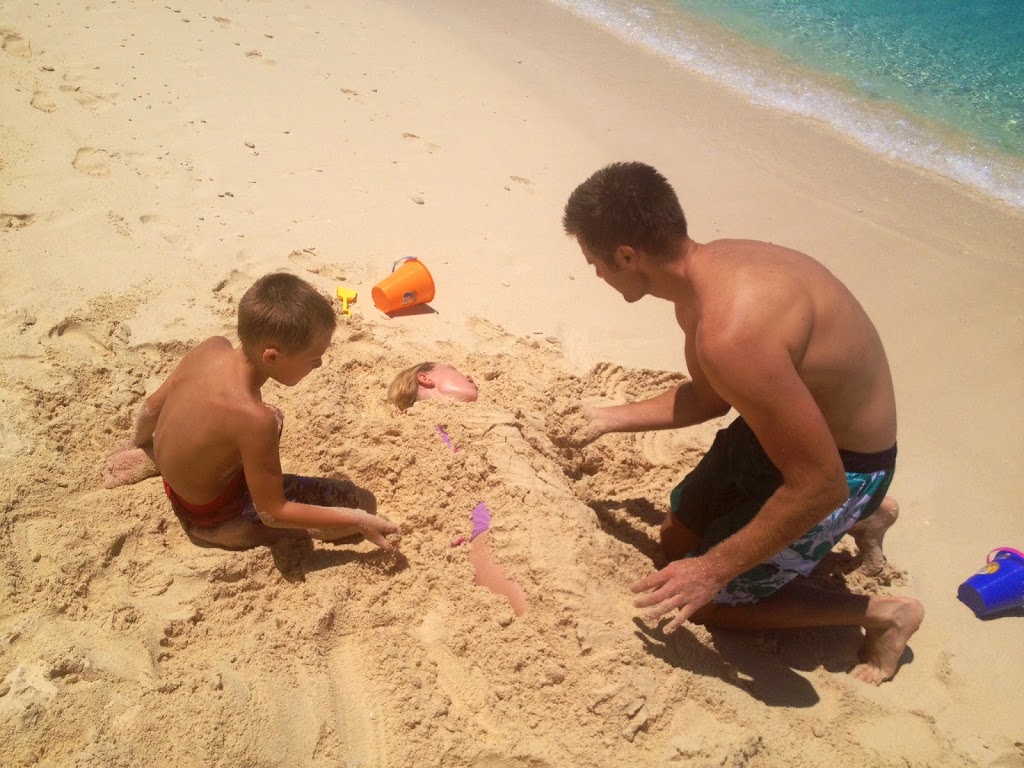 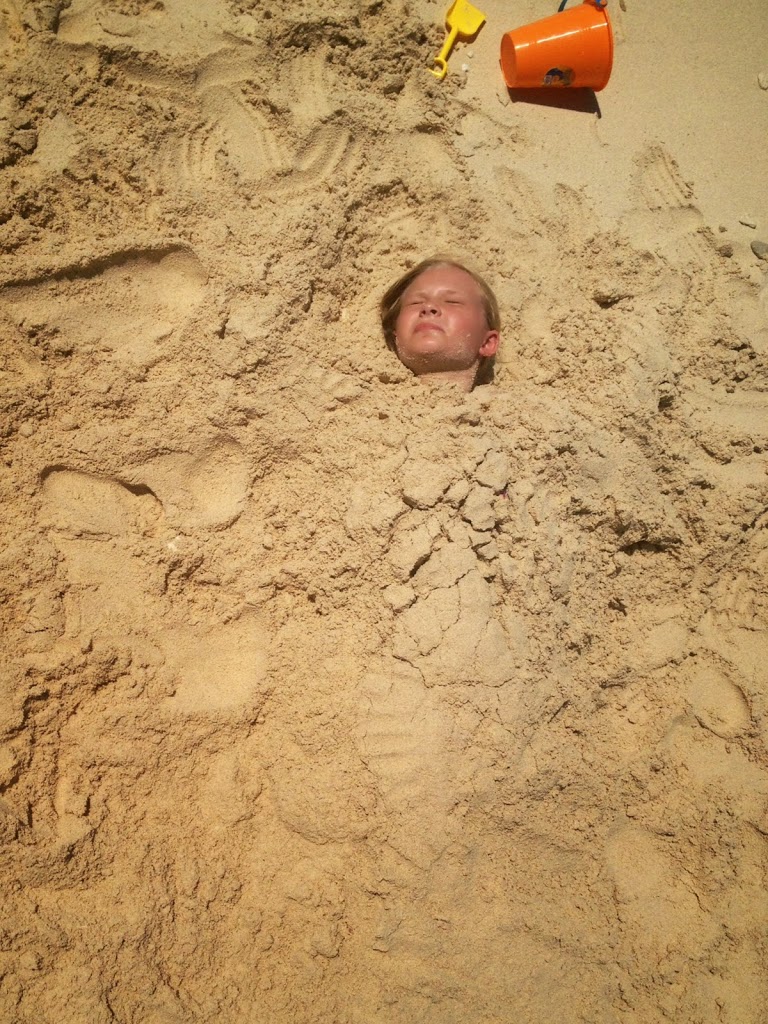 And I must write something related to radio.  It continues to be great fun to generate a pileup using 100 watts usually into Europe and the U.S. Conditions into Japan have not been very good which I think is a combination of the time of year and propagation.  I spoke to my dad on 40 SSB one night.  The 5 element 40 meter Yagi is loud!  His signal peaked around 50 over S9 on the meter during our conversation running a KW.  I’ve been using the club’s Icom 756 when I get on the air.  It is much easier to not have to lug the TS590 from our apartment to the station.  Seems to be a really good rig.  I should have an amplifier in a couple of weeks, which I’m hoping will enable me to get on from our apartment with a loud enough signal to get a nice run going. 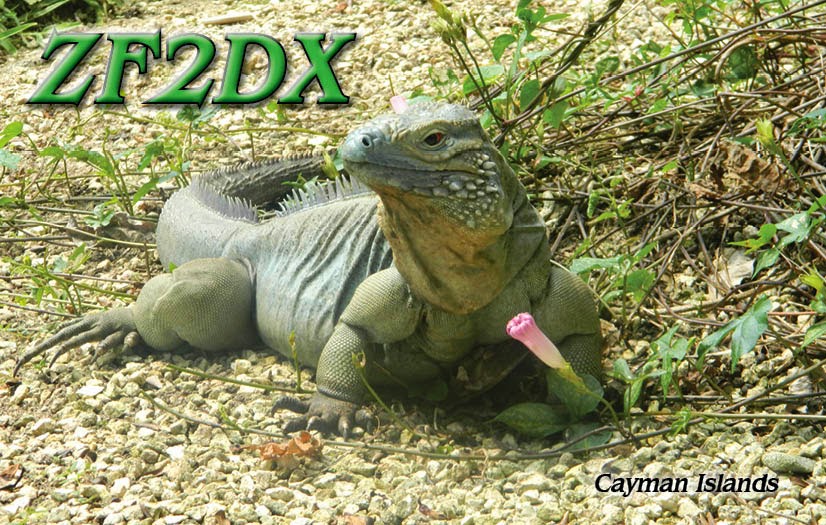