Preparing for an amateur radio contest is nearly as fun as operating the contest.  Designing, building, and maintaining a contest station brings a unique set of rewards.  As does planning, practicing, and implementing an operating strategy for maximizing contest score.  While both station building and operating bring a unique set of rewards, station building tends to eat up an inordinate amount of time.  The time to plan, build, implement, and maintain a contest station outweighs the time spent preparing to operate that station.   I’ve been fortunate to be a guest operator from the N2QV station in New York since November of 2015.  While I miss the satisfaction of building and installing my own antennas, guest operating has provided an opportunity to give more consideration to operating strategy and improvement.

I’ve recently implemented some specific strategies for improving operating skills.  For adults, its extremely difficult to make significant changes in any aspect of our lives.  Our bodies and  minds are not nearly as malleable as when we were children.  However, it is still possible to make big changes, but it takes an extreme amount of effort.  For the past year, I’ve attempted to hone the three following principles:

Since November of 2017, I’ve instituted the 10,000 Q rule.  Simply stated, log 10,000 dual run QSOs in DXLog before a major contest.  This rule was first implemented for the 2017 CQWW CW contest and subsequently in the 2018 ARRL DX CW, 2018 CQ WPX CW, and 2018 CQWW CW.  That’s a total of 40,000 simulated contest QSOs with real call signs in dual run (OK, 2BSIQ if you must) mode.  Seeing guys like KL9A, N6MJ, and N4YDU put up some big numbers both on and off the air was a significant motivating factor for me to learn to manage two pileups simultaneously.  I’m slowly learning to run faster and still have a ways to go to catch up to the top ops.  But, its encouraging to see small improvements over time.  Below is a checklist that I’ve tried to follow when practicing:

1. Make 10,000 Qs before the start of the contest using DXLog in Dual Run mode.
2. Practice for at least one hour per day in ten minute increments.
3. Track number of Qs per 10 minutes, average number of Qs, Overall Qs, average pileup size, and average speed.
4. Make notes after sessions in order to document thoughts or strategies to improve performance.
5. Use a tailored database comprised of the most active DX callsigns.

Screenshot of the Google Sheet used for Tracking Progress

Because I’m cheap and a glutton for punishment, I decided to drive to New York for the 2018 CQWW CW contest.  I could have easily hopped on an airplane and made the direct flight to La Guardia in about three hours but in addition to the two previously cited reasons, I also wanted the flexibility that is provided by driving.  It’s nice to not mess with TSA, crowded airports, and being at the mercy of “mechanical problems.”  Even easier would have been to operate the contest remotely.  But I missed operating in person and am beginning to appreciate the advantages and satisfaction of being on site for contests.  So a 20 hour car drive provided lots of time for mental contest preparation.  The first three hours of the car ride were spent in silence attempting to create visual representations and plans for hour by hour operating strategies.  This is much harder than it sounds.  The human attention span is somewhere around 8 seconds, clocking in just behind that of a goldfish.  During the exercise, my mind would often drift off onto random subjects and I had to constantly refocus on walking through each hour of the contest.  Below is a checklist of items that I attempted to think through and visualize on an hour by hour basis for the contest:

A few hours before the start of the 2018 CQWW CW contest, I began to write down band goals for contacts, zones, and countries.  After finishing, I promptly wadded up the piece of paper and threw it away.  Too many uncontrollable variables impact an operator’s score that can trick that operator into feeling a sense of accomplishment or failure.  Two significant ones being equipment failures and unforeseen propagation changes.  Other ones happen too such as when a hurricane or massive ice storm roll through, destroying some or all of the antennas.  Totally unrelated to radio life matters pop up too such as signing papers for a house closing during a contest.  Regardless, judging contest performance based on a few numbers should not be the best indicator of how well that operator performed on that particular weekend.  One other variable comes to mind that impacts contest results- the arbitrary system of using continents to base points per QSO in CQWW contests.  It’s not uncommon for a second or third place world finisher to have MORE contacts, zones, and countries than the first place world finisher.

Judging contest performances on habits and not score seems strange.  We are habituated to believe that the person or team with the highest score was the best.  From a literal sense it is true that whoever has the highest score is the winner.  But does that mean that person or team actually performed at their personal best?  Attempting to judge contest performances based on 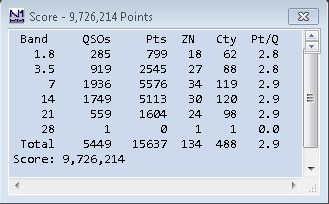 While the 10,000 Q rule, forming precise visual representations, and implementing habits played a part in the final score from the 2018 CQWW CW contest, it is still true that having a big signal and even bigger ears on all bands is a must to be competitive.  The 2018 CQWW CW contest provided perfect conditions for running two pileups simultaneously from the United States with the majority of those hours occurring on the low bands.  It will be really exciting to see the big numbers that will be amassed in a few years when the high bands start to come alive again.