Christmas came early this week when our belongings from the U.S. finally arrived. Michael was excited to find his lego set and Katie was happy to get her doll accessories to use with McKenna (her American Girl doll). Jennifer unpacked some much needed kitchen utensils and accessories. I was thankful to open an Ameritron AL-811H amplifier that I will put to use from home and during various contests. Of course getting our stuff wasn’t without some drama. Somehow the freight forwarder managed to 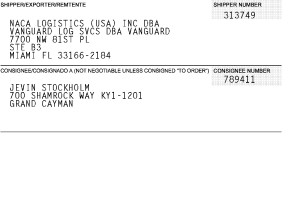 change Kevin Stockton into Jevin Stockholm on the shipping documents. I had originally planned to deal with customs myself which also meant that we would pick up all of our boxes from the dock and then carry them up the three flights of stairs to our apartment. After receiving some sage advice from Victor, at Seaboard Cayman, I decided to have Miracle Brokers handle all of the customs documents and delivery of our items. It was well worth the money to not have to spend several hours with customs as they searched through our belongings.

On Saturday, May the 10th, I had my first tower climbing experience in the Caribbean. Along with Andrew, ZF1EJ, and some of his helpers, we installed a set of guy wires on his enormous free standing tower. It was a little unnerving climbing the tower as it was similar to a giant ladder. There wasn’t a good way to secure a safety belt as I climbed, so for 40′ I used some giant hooks on the fall harness to lash myself to the tower.   However, the securing and releasing of the hooks to the tower seemed to be more dangerous than just climbing so I ditched the hooks and quickly (but safely) made my way to the top of the tower.

With the guy wires installed, the tower could probably withstand another Ivan, which had peek winds of over 200 mph! While tightening the guy wires to the posts I uttered the phrase, “say when” to let Andrew know when the guys were tight enough. One of Andrew’s helpers chuckled and said, you remind me of that movie. He thought for a minute and then said, “Yes, Tombstone, that is one of my favorite movies.” He then started to ask me about Doc Holiday and wanted to know if Tombstone was a real story, as if it was taught in our history books in school (I wish it was because it is way more interesting than the war of 1812).  Michael went out a few days before the tower project and helped me put some guy grips onto the guy wires. We spent a lot of time talking to Andrew and getting a tour of his excellent station and radio room. Michael was particularly enamored with Andrew’s three dogs and he couldn’t understand why the smallest of the three dogs was the most likely to bite.  We also picked and ate some Naseberries from Andrew’s orchard.  I’ve never tasted a sweeter fruit in my life.  Picture a cross between a pear, apple, and the sweetest sweet potato you’ve ever tasted. 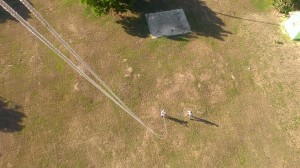 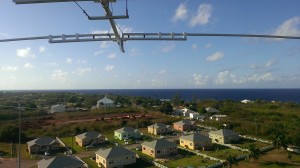 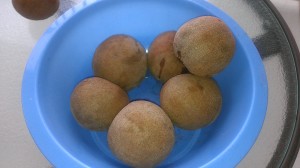 Lately it has been raining for brief amounts of time and in very isolated patches around the island.  One day while at school a particular hard rain was pouring down and a little boy came out of his classroom to investigate the storm.  With eyes wide as saucers and he yelled out, “Jesus Pete” at the top of his lungs and then quickly retreated back into his classroom.  I had never heard this saying before and the moment was hilarious.

We really enjoy our three bedroom apartment that we are renting.  It has minimal finishes inside the apartment, but the view of the ocean is nice and the 60′ long pool is fun for all of us to play in.  It is also conveniently located to most of my schools and is less than a 5 minute drive to the kids’ school. We really only need two bedrooms but it is nice to have the spare bedroom for when guests come to visit.  Katie and Michael are sharing a room that has two twin beds in it.  We discovered that Michael has been sneaking into Katie’s bed to sleep with her at night.  Two growing kids in a tiny twin bed is not my idea of comfort. 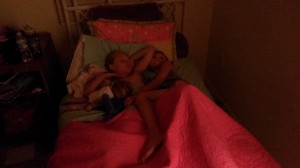