Every Tuesday I travel to the small island of Cayman Brac to work with kids in the public school system that need speech and language services.  The day can be a long one with me arriving at the airport at 7:00 in the morning and returning back to Grand Cayman around 4:30 (usually).  The flight is on a puddle jumper plane that holds around 20 passengers.  Seats aren’t assigned and I’ve learned to be at the front of the gate line if I want to have an individual seat.    The plane travels very close to the ground and it gives a nice view of all three of the sister islands.  On the 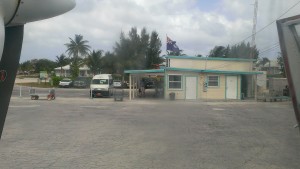 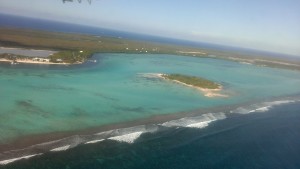 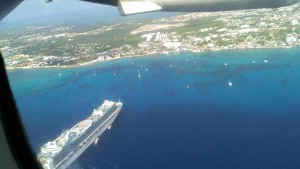 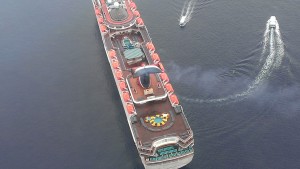 return flight, we stop briefly on Little Cayman to drop off and pickup passengers.  Little Cayman is so small that the main road runs right through the area where the plane taxis so the road is shut down whenever the plane is in the process of landing or taking off.

The Brac, as it is known to locals, is located about 90 miles Northeast from Grand Cayman.  It is home to 2,000 residents and is a small island that is only about a mile wide and twelve miles long.  You can drive from one tip to the other in about fifteen minutes. 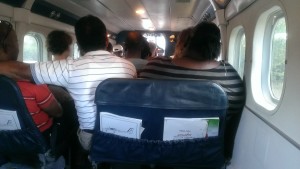 Seating is at a Premium

As most islands are, the Brac is extremely isolated from the rest of the world.  They have television access but there are no major restaurants, supermarkets, or commercialized entertainment options (no movie theater, no mall, no Wal-Mart, and definitely no Sonic).  Your major entertainment options are socializing, drinking, staring at the ocean, and diving.  There are no traffic lights and rarely do you hear any sounds besides the ocean and birds.    At first this was very difficult to get used too.  Stepping off the tiny commuter plane and hearing and seeing nothing was odd.  However like most things, I’ve settled into a routine and its just another day at work.  It is typically a busy day with me visiting 3-4 schools during each trip and working with a variety of students ranging from ages 2-12.  The government rents a car for me each trip and I’m greeted at the airport by a very friendly local lady who drops the car off for me.  She has even started to give me an upgrade which she refers to as “my car” as it has a little more leg room than the typical rental car.  If I’m not to busy I try and grab lunch at the Reef Resort.  It is the only hotel on the island and their food is usually very good.  The waitress there knows my order by heart and was able to complete it for my parents even though I wasn’t there, and she had no previous tip off that I was of any relation to them. 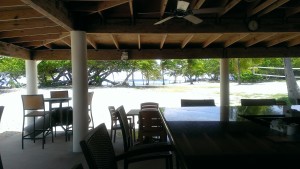 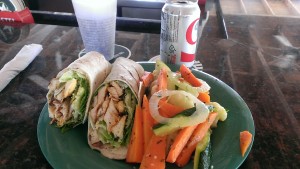 Lunch at the Reef Resort

During a recent trip, a new Occupational Therapist who had recently moved here from London traveled with me over to the Brac.  She couldn’t believe that when returning the car; that we were just to leave the car unlocked with the keys in the glove compartment at the airport parking lot.  Being from Harrison, Arkansas this wasn’t much of a shock to me as I usually never lock my car.  The Brac is a very safe and a crime free place to visit and live.

“Brac” is some sort of Irish (or perhaps Scottish) word that means hill.  There is a slow rising hill that begins at the southern tip of the island and gradually increases to a height of 140 feet at the northern tip of the island.  This hill runs through the middle of the island which creates a dichotomy between the northern and southern sides of the island.  Recently my parents visited for one night on the Brac.  Typically, my plane departs the Brac around 3:30 in the afternoon to return to Grand Cayman.  It just so happened that the day my parents were visiting that my flight was delayed for 5 hours due to some sort of botched landing by a cargo plane at the airport on Grand Cayman.  This gave me an opportunity to a hitch a ride with mom and dad and visit the northern tip of the Brac.  The scene there was incredible.  It looked as if you were peering off into the end of the world with a straight drop off down to the ocean below. 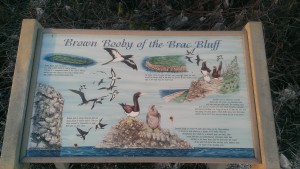 There were lots of Brown Boobies at the Brac Bluff 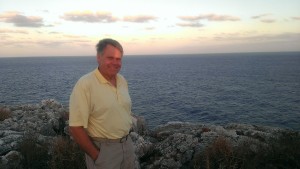 Stan (K5GO) at the Lighthouse Bluff

One local has a penchant for creative art and he displays it prominently at his residence on the southside of the island.  His art is unique and most of the locals do not approve of what he does mainly due to the conservative aspect of the islands.  There are many caves around the island but I haven’t had any time to explore them.  Legend is pirates used the caves to hide their plundered loot. 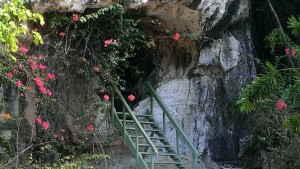 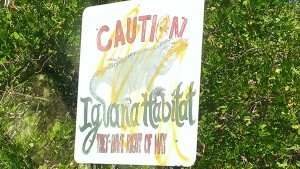 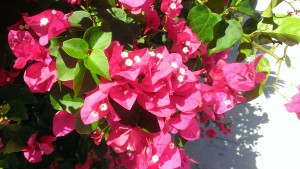 Flowers on the Brac 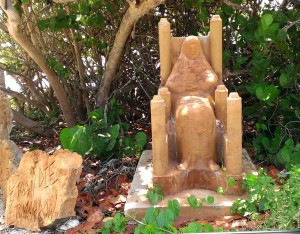 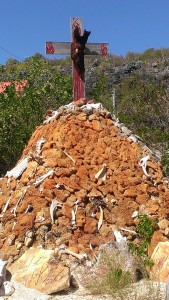 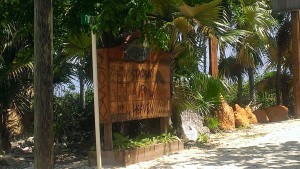